Joke Of The Day: Nizar Sent Off Immediately Just After Sworn-in

Joke Of The Day:
Nizar Sent Off Immediately Just After Sworn-in 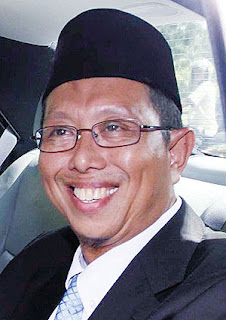 New elected Bukit Gantang MP Mohammad Nizar Jamaluddin was sworn-in as Member of Parliament today.
However, he was kicked out by Parliament Speaker Pandikar Amin Mulia immediately after his the sworn-in ceremony.

Than, he kicked out by Speaker,
who havent heated his MP seat in parliament.

There are other 6 MP kicked out together with Nizar.

However they were kicked out by The Speaker with reason of: Irrespect Speaker Orders and Violation of The Dress Code.

Opposition Leader Anwar Ibrahim said that it is allowable to wear armband or headband in others countries parliament, however the respond from The Speaker was ask those suspended men to be others countries MP.
This shows that The Speaker doesn't shows his professional and responsibility:
He should research whether Anwar's status was correct before giving comment.

Why do The Speaker afraid with the wording: Bubar DUN?
Don't he afraid he will dragged out by police exactly what happened in Perak?

But I salute The Speaker:
He break a new record ever in this world---Kicked Out A MP Just After He Sworn-In.

everything not to be one sided and bias...