From the highlight from Sport Center of ESPN, I knew we play a good game against Celtic. 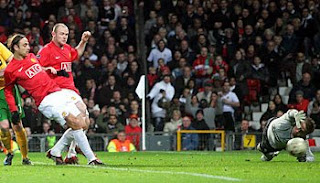 The most glad is Wayne Rooney can't stop his scoring. He scored a beauty at 76min confirmed United win in this match.

United is still top of Champions League Group E and only need another 3 points to qualify.

By the way, United young center back Jonathan Evans earns positive feedback for his replacement on Rio Ferdinand. It is a good news that we has such talent youngster in our club.

It is a difficulty to select players on front line. Barba and Rooney can't stop scoring. Carlos Tevez been forced on the bench.
According to Sport Center, Cristiano Ronaldo was planned to rest on the bench and Tevez was supposed to start. However tactic amended in the last minute.

I hope Tevez will start on weekend.